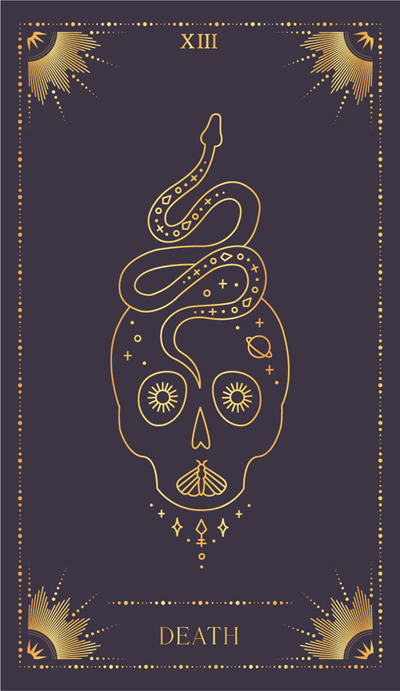 Don’t we talk in spiritual terms in this community? We talk of death as if it is a beautiful experience. Some also play down the Tower while it’s been nothing short of devastating in my life.

We tend to do this with the Death card too – “Death doesn’t mean death, it means transition, or the end of something.” And so it goes on. But sometimes Death does mean death and more importantly, it is a part of life we cannot escape from. Like the Tower, when it comes crashing down around your ears. If you’re not already on your Chariot ready to drive through the devastation like a phoenix rising from the ashes, you will find yourself in the rubble, scratching your head and wondering what on earth just happened and where do I go from here?

This week death came a knocking to my home. I lost my beloved dog, Shep – a constant companion of thirteen years. He was diagnosed with a mast cell tumor six years ago. He was mostly untroubled by it for three years until it metastasized and began to take him over. He lasted another three years until this week when I had to make that awful decision to help him on his way to the Rainbow Bridge. See how I can’t even say the realistic and honest words that describe what I had to do? Death comes a knocking, but even when we see it coming from a mile away, we still cannot face it.

Death is still around us here, as my mother lay in the hospital with terminal cancer, her chemotherapy treatments doing more harm than good. It is just a matter of time but still I cannot bring myself to say the realistic and honest words that describe the horror of what I am witnessing. There is no helping my mother on her way like I did for Shep. Of course I will ask our ancestors to meet her and help her on her way when it is time, as I did for Shep. Of course I pray for her smooth transition. I look to the heavens and pray the angels will take her and that she won’t suffer. I pray she passes in her sleep, unaware of what she is most afraid of…. And yet still I cannot say the words.

Perhaps this is part of the problem. It is true that death is a transition but first and foremost, it is the end of life and in tarot at least, we can be guilty of glossing over that undeniable truth. I have seen the Death card in two tarot readings that unequivocally meant physical death and at the time, I knew it.

The first time I saw it I was a novice reader. I never second guessed what I saw because the Death card practically jumped out at me from the reading. I knew exactly what it meant but I rattled off the line of “it just means the ending of something”, in this case, a relationship. Two days later, one half of the relationship in question had committed suicide. Death had certainly meant death and I never looked at that card lightly again.

The second time I saw it was many years later. A dear friend (and tarot reader) had breast cancer and wanted a health reading. I did my best to refuse but Jules was a formidable woman and I could not refuse her for long. Death was the outcome card and while she wrote it off as someone else she had been thinking about, I knew exactly what it meant. I also think she did, privately. I don’t do health readings any more.

So what does all this mean, this talk of death? And how do we handle it in our lives and tarot readings?

For one, do not be afraid to recognise that the Death card can sometimes mean physical death. You may not want to report that back to the seeker. Seeing death in a reading puts you in between a rock and a hard place – do you tell? That is up to you. It is wise to exercise caution – on both of the occasions above, I never said unequivocally that death was before these people.

For your own personal practice and understanding of life and tarot though, it is equally important not to gloss over the fact that Death isn’t pretty, it is a very real part of life and it will visit your family and clients. Even if you see it coming (through the tarot or ill health), you may not be so prepared. That is normal. We are only human after all.

My point here is to remind you, or point out to you, that death isn’t fluffy and before it is spiritual, it is physical. And real.

Update: I’m sad to report that my mother passed away four days after this blog post was written. I was at her side when she passed. When death came, it came quickly, which is a blessing for my mother, but a shock to us remaining. I asked our ancestors to come for her, in particular her beloved brother, Ron. I sang the only Jewish song I know, Shalom Chaverim, without really knowing what the lyrics meant. It came spontaneously but I can see now why it did. Also unaware of other traditions, I opened the window in her hospital room. There were many other things that occurred but shall remain private, but contribute to a warm, connected and peaceful passing.

At her funeral we played her favourite opera music, her favourite hymns and Bible readings. Surrounded by friends and family, and adorned by her favourite flowers, oriental lilies, white roses, gypsophila and dark ferns, we committed her body and soul to G-d.