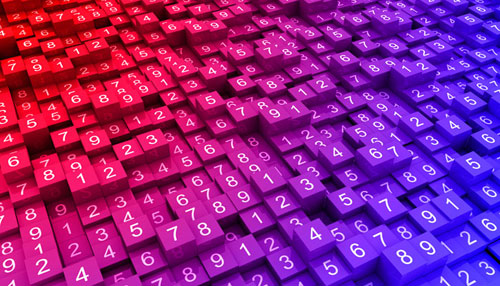 Often called the Minor Arcana, or the Pip Cards of a Tarot deck, they number 36 in total. I explore the actual cards in my tarot card meanings section. In this post, I want to show you how the numerology of the Minor Arcana works and how the numbers themselves have universal definitions that can be broadly applied to all cards and metaphysical situations. You will no doubt see relationships between the numbers here and the general definitions of the Major Arcana.

I will include the Tarot Aces in this section to remain true to the numerological starting point. This is however, an area for debate due to the formless nature of the Aces. It seems to be a poor correlation when you consider the Aces in relation to the Fool, they are more at home there, but 0 still doesn’t equate to 1. So in trying to make this part of the jigsaw fit, we’re extending the value and size of the Aces to incorporate more than the essence of their element, we’re actually asking them to become 1, to begin taking shape before they leave their sphere and enter into the numbered cards proper. But there is something else for us to consider and explore.

The Tarot card most suited to number 1 is the Magus, or Magician – being numbered 1 in the Major Arcana. Let’s consider this card for a moment. Contained within the imagery of almost any version of the card, you will see the Magus complete with a wand, a cup, a sword and a disk, either on a table or near his person. It’s a simple explanation, as the Magus is the character who possesses all of the essences, or energies of the suits – the Aces. He has them all at his disposal, ready to implement them whenever he wishes and for whatever purpose. He is the vehicle that takes the essence of the Ace and gives it form. You, in effect, are the Magus. If you accept the gift of the Ace, then you’re the one giving it form before it begins to take on attributes and developments through the numbered cards, the Minors.

So, when we look at the number sequencing, we can place the Aces in the number 1 position if we place the Magus with them, or at least remember that’s him (you) who will pull the Aces from the ether into the numbers.

This list is not meant to be definitive. There are as many keywords to the numbers as there are keywords to the cards themselves. The point is for you to be able to get an idea of how the numbers can cross over the Tarot suits and be appropriate in an upright or even reversed position.

5 thoughts on “Numerology of the Minor Arcana”