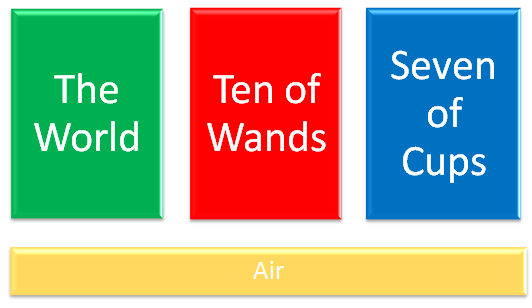 This is an easier process with fewer Tarot cards, say three or five. A Celtic Cross spread would be more challenging, but still possible. What you would be looking for is how the elements of the cards interact with the elemental base.

If we look at the first example, a question about love, then the elemental base would be water. If the majority of cards in the spread were fire cards, then you would assess them to be elementally at odds with each other, and reducing their strength and message. Likewise, if a majority of earth cards were in the spread then the water would be supporting the cards and reinforcing them. The only issue with them would be the passive nature of both elements. The best way to look at how elemental bases affect your Tarot readings is to look at one in depth.

By using the different elements in the base position, it clearly shows the differences they can make to the reading. Not just that though, they give a greater insight as to what is going on in the situation, viewing it from every angle, so to speak.

The following is a reading I did for a client who was having some problems in his life. Edward was a businessman, and Sylvia, his wife, was also his company accountant. Edward was concerned that Sylvia may have been defrauding him and the company. They had both agreed to a divorce. 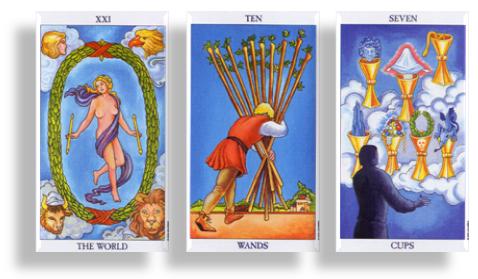 Interestingly we have 2 completion cards – one of a woman, the other a man, he doesn’t look to be coping too well. He carries all his wands on his back, he manages it, but it’s a fine balance. The woman on the other hand, looks liberated. She is the dancer and she is light on her feet, a stark contrast to the man. The other card in this reading is the 7 of Cups – illusions, choices, fantasy, indecision. So who does that apply to? It could be both, the dancer could be putting on a good show; the illusions in respect to the man could be his life literally, none of it being as successful currently as it would outwardly appear. I don’t believe looking at these cards, that they are suggesting there is anything underhand going on. I would have expected the 7 of Swords, amongst others, to show up if there were. The 7 of Cups is here to say that it’s not true, but sheer imagination running amok.

Applying Elemental Dignities to the Reading

Elemental Dignities are usually read in triplets, that is three Tarot cards at a time. The middle card is called the Principal card, and it’s here where you should begin your assessment. The cards either side of the principal card are called the Moderators and they will either support the principal card or weaken it. By assessing the cards in this way, we are seeking to find the strongest card as our focus will shift onto that instead of the principal card if it turns out to be a moderator instead. Finding the strongest and weakest Tarot cards in the triplet will help to add extra depth to the reading, as their divinatory definitions or meanings will either be reinforced or as I like to call it – levelled.

If you’re unfamiliar with Elemental Dignities, there are some guidelines you need to be aware of when you read this way:

Having looked at the guidelines, let’s now look at the Elemental Dignities of this Tarot reading:

The fire and water cards weaken each other leaving earth as the strongest card as it’s supported by the water and is neutral with the fire. This Shows Sylvia to be in a strong position. She may have the upper hand in terms of personal strength and belief, though it still doesn’t suggest she is acting inappropriately. What we now need to look at is adding a base element to the cards and the question and see what else we can find.

The next important step is to decide on the elemental base itself. You would do this simply by working out the nature of the question, as I showed earlier. It’s my opinion that the basis for this question lies with air or earth. Air because it is a deceit and it takes clear logic and cunning to pull it off; earth because it is aligned to wealth, property and greed etc. Let’s look at all of the elements as bases to show you the different ways they can affect your Tarot reading, and indeed the Elemental Dignities that I analysed earlier.

Elemental Base of Air

The 10 of Wands is the principal card and is also the strongest with air as a base. It’s friendly with air which fuels it, but it’s not supported by both moderators – earth is an enemy of air, which can reduce the air or trap it, which can reduce the fire. This can have a stabilizing effect on the air/fire combination which is active and can be unstable. The water is friendly to the air, but dampens the fire. The earth and water quell the fire and reduce some of the air.

If we use air, then Edward (10 of Wands, fire) is in the strongest position as he has the air fueling him and giving him the mental edge. Sylvia (The World, earth) is at odds with the air – that which feeds Edward. Though earth is supporting but neutral to the fire, he is being weakened emotionally (by the 7 of Cups, water) but he is strongest in this elemental base because of the air that fuels him.

Elemental Base of Earth

The World is the strongest now – earth with a solid base of earth. The 10 of Wands is still friendly with the earth, but it’s not being fed with air now; it’s squashed by the earth and dampened by the water. The water can soften the earth, but its double combination keeps it strong.

Looking at earth and Sylvia is in the driving seat. Edward is still being affected by the water, but where Sylvia was losing strength to the air, she is now being supported. Edward is squashed between the dam of emotions that can dampen his fire and the large landscape that supports Sylvia. The only thing he can try and do is rise above this, but it would be difficult, if not impossible. This is Sylvia’s strongest set.

Elemental Base of Water

You would think that water is now strongest as visually it looks that way, but it’s still under a little pressure from the fire. This is reciprocal though, as the fire is being squashed again, this time being dampened by the water and the solidity of the earth. The fire could go up, but it’s not being fed now and is being dampened from beneath too. It looks like it’s in trouble.

With water as the base element, Edward is suffering. He is overwhelmed by the emotion, perhaps it’s making him uncomfortable, looking at things he would rather not. Sylvia fares better here, but with all this emotion around, it lacks the stability that would sustain her.

Elemental Base of Fire

With fire as the elemental base it looks like it dominates the triplet. It has the potential to overrun the other elements, though the water may keep it in check, the water itself could be under pressure as the earth on the other side of the fire acts as a road block, preventing any movement to the left.

If we use fire as the base (power struggles, passion) then Edward is undoubtedly the strongest. Even if Sylvia managed to cream off some profits for herself, in this position, it can’t hurt Edward for fire feeding fire is strength and power. I don’t believe the water and earth either side are enough to quash him here. Overcoming his emotions will allow Edward to regain his spirit and drive and perhaps see things more clearly.

Is Sylvia defrauding Edward and the company? It’s possible, the illusion card is there, but it’s only strong in one position. It’s possible that the illusion is the mask that both parties wear for each other and the world. An elemental base would have to be decided upon to say for sure. With air as the base, Edward is strongest. With earth, then it’s Sylvia.

Elementally, earth offers the most balance, but even then, the fire isn’t too happy. The situation, though stabilized is lacking any action or movement, which to be honest, is perhaps what is initially required, a settling down, stabilizing effect to regroup and then think. With water as a base, they’re emotionally overrun – the absence of clear thinking, of intelligent thought processes show they are thinking with their hearts and not their heads. Air would be beneficial, but as a base is at odds with the earth. With fire as a base they are looking at acting without thinking, impetuous behaviour being as damaging as drowning in a sea of emotional turmoil.

I still don’t believe that Sylvia is doing anything untoward, what I think has been shown is how delicate their relationship is right now, and how easy it is to get caught up in fantasy and paranoia. The absence of air in those three cards is as telling as the elements present, and as opposed to a base element, this situation would benefit greatly from some serious thought and reasoning.

Applying Elemental Bases to Your Own Tarot Readings

If you want to try adding an elemental base to your own Tarot readings, the best place to start is with a simple three card reading. It’s best if you can decide on the base element before you begin your analysis, but it would be really great practice to try all four elements separately to see how they interact with, and change your Tarot reading.

It would be great to hear how you get on with this exercise, please feel free to contact me or share your experiences with other readers.