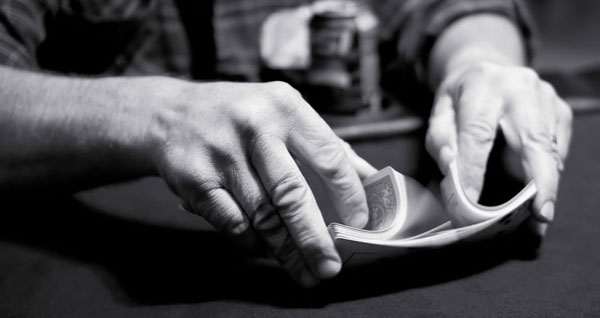 Picture the scene: your pre-ordered tarot deck has just arrived and you are so excited to get those cards into your hands! Only when you do, they don’t fit you.. Damn. A little bit of joy is lost. They are large in your small hands and when you try to shuffle them, they just fly everywhere! What can you do? How can you possibly shuffle these beautiful but large (or odd shaped) cards?

Let’s look at your options.

*This article assumes you are right-handed. Please make adjustments to these instructions if you are left-handed*

Every experienced tarot or oracle card reader will have settled on their preferred method of shuffling their cards. They will have tried and tested many methods before settling on one or two ways. These methods can be used for regular sized cards so if you are new to tarot or still finding your way, the following list will be of help no matter the fit between your cards and your hands.

Depending on the size of your hands, and the deck in question, you will either hold the deck vertically or horizontally and proceed to hold the front half of the deck in your left hand while you bring the rear of the deck over the top of the front with your right hand.

This can be done once per round or several times moving a smaller number of cards each time you overlap the front cards with the back. For a more thorough shuffle, it is best to do this overlap several times per shuffle.

However many times you perform multiple shuffles is up to you but as with many things in life, the more the merrier. Bear in mind though, the more you use your tarot cards, the more wear and tear will start to appear on them. Caring for Your Tarot Cards has tried and tested methods to help you counter that.

However many times you perform multiple shuffles is up to you but as with many things in life, the more the merrier. #tarot Click To Tweet

Knowing When to Stop Shuffling

This part is as important, if not more so than the shuffle itself – how do you know when to stop shuffling and start dealing out the cards for your tarot reading?

When I’m doing a overhand shuffle, I usually keep going until one or more cards ‘jump’ out of the deck or I feel ready or prompted to stop shuffling.

A Word About Jumping Tarot Cards

It seems there are two camps here – you either revere the jumping tarot cards, or you simply put them back in the deck and carry on shuffling.

I’m in the former camp. Each and every jumping tarot card that has flown out of any of my tarot decks have always been on point and often make me double-take with their accuracy and appropriateness.

If I have decided to do a large tarot reading, like the Celtic Cross, for example, and a card or two jumps out while shuffling, I assess them straight away to see if they answer my question without the need to continue with a larger reading. If they do – great! Otherwise, I put them to one side and carry on with the shuffling and use them as extra information either during or at the end of the reading. This tarot technique works with any tarot spread, not just the Celtic Cross.

If your tarot deck is large in your hands, or is an unusual shape, the Motherpeace Tarot is round, for example, you may want to ‘cut the deck’ in addition to the overhand shuffle, or use it as a standalone method. Generally called the Pile Shuffle, there are two main ways to do this and they are called the Half Cut and the Triple Cut.

The Half Cut pile shuffle is mostly self-explanatory – you simply take the stacked deck and remove the top half and put it to one side then add the remaining half to the top of the removed pile. This creates a new single stack but has effectively split the cards up. You can do the half cut as many times as you feel the need to and you don’t have to be exact with the size of the first half you remove from the stack. In fact, the ‘half’ can consist of any number of cards from a single to one to 77. Do whatever you feel drawn to do.

The Triple Cut pile shuffle follows the premise of the Half Cut but instead of splitting the deck into two piles, you split them into three. Simply take a number of cards from the top of the deck and put them to one side of the stack, then take another section and put that on the other side. You will now have three piles of cards. You can re-assemble the deck by simply putting the three piles back together, though be sure not to just put them back into the same order when you cut the deck.

Shuffling the Deck in Between Cuts

If your deck is large, or the card stock is thick which makes the deck fuller, the Sun and Moon Tarot by Vanessa Decort is like this, shuffling the piles in between cuts can be an effective method of really mixing your tarot deck up into a random order. I talk about this method in How to Get Great Tarot Readings from Your New Deck Straight Away. To effectively make a new tarot deck, or a re-ordered one, randomised, creating lots of smaller piles, shuffling them and bringing them together a few at a time really helps the process.

If all that sounds like a lot of work, or may be just a little too technical, there are a couple of other non-shuffling methods that help you draw individual tarot cards for your tarot reading. They are the Fan, the Linear Draw and the Corgi shuffle.

We are all familiar with the shape of the fan used by Spanish women during warm summers. It is an arc, or a curve and it is this shape that we can use by holding the deck in one or both hands and spreading them out to make the shape of a fan. This is actually quite messy and doesn’t separate the cards too well but works when space is at a premium and you cannot lay the cards out in a straight line, like the Linear Draw.

With a nice amount of table, floor, (made) bed or any other sizeable surface, you can simply take your deck and tease it from one side to another creating a long line of tarot cards in what I call the Linear Draw. You often see this line of cards on free reading websites and apps. The reality is your line won’t be as neat as a digital one, but that’s ok. What we’re looking for with the linear draw is to get a feeling towards individual cards so that you select them for your tarot reading. This method does make the reading more interactive and can instil a feeling of credibility because of how you personally selected your cards.

The Corgi shuffle is perhaps the least technical and most fun way to ‘shuffle’ your tarot cards. You literally push the stack down and around and around until the cards become mixed up and randomised in front of you. You need a decent sized surface for this technique if you are to mix them up properly. When you’re happy that your cards are thoroughly mixed up, spread them out as much as space will allow and then select your individual tarot cards for your reading.

It is worth noting that the Corgi shuffle will create a tarot deck with reversed cards so if you like your cards upright, this method may not be for you.

Seeing someone riffle a set of playing cards always looks pretty impressive. But I implore you - don't riffle your #tarot cards! Click To Tweet

The One to Avoid – the Riffle

Seeing someone riffle a set of playing cards in a casino or other setting always looks pretty impressive. But I implore you – don’t riffle your tarot cards! Casinos use brand new decks constantly because they quickly become worn and the riffle will do this to your beloved tarot deck in no time at all. I’ve seen tarot readers do this and it makes me squirm. Their poor deck! My 1971 vintage Rider wouldn’t be in the excellent condition it is still in if it had been riffled regularly. Please don’t feel the need to impress anyone with your riffling skills and your tarot deck. Save it for card night and a 52 card playing deck instead.

Modifying a Tarot Deck to Fit Your Hands

You can modify a tarot deck to fit your hands by trimming off an unnecessarily large border. I’ve done this with several of my tarot decks, mostly successfully. While that little caveat at the end there may sound a little scary, trimming a tarot deck to fit your hands is a pleasant exercise. It is a commitment to accuracy and time though – you have to trim 78 cards, with four edges and four corners, and you need the right equipment to achieve a professional finish. I find a guillotine or rotary trimmer better than scissors and a corner rounder is essential – so is the size of the corner it will cut.

I ruined the Tarot of the Sidhe and the Golden Dawn Magical Tarot because trimming the large borders on those cards proved difficult. However, I successfully trimmed the DruidCraft Tarot and the Medieval Enchantment. Both of those decks became much more useable after trimming and remain in my top five tarot reading decks.

Do you have a different method of shuffling your tarot deck? Or do you prefer to follow a particular ritual prior to reading your tarot cards? Share your thoughts in the comment section below.

Back to top of page