Using the Celtic Cross Spread to Explore a Past Event

We mostly use tarot to find out about the future, or explore a current event in our lives or that of our clients. Tarot is also an excellent tool for exploring past events too. All we need do is tweak the positions of our favourite tarot spread and we have our very own questionnaire built to explore the past! I’m going to use the Celtic Cross Tarot Spread in this post as it lends itself well to customisation.

(See my free tutorial on the Celtic Cross for a deeper understanding of its use.)

Defining a Past Event

Perhaps our first thoughts are about a recent break-up of a relationship, the loss of a job, an argument with a friend – all these are excellent candidates for retrospective tarot reading.

We can explore our own actions and gain clarity on events we never fully understood, why we acted a certain way, why we said those awful things, why we acted in a way we didn’t really mean to.

There are lots of answers to be found in the past and a good tarot spread can help us go over these events with a fine tooth comb, and often with less pain attached. It’s in the past, the wounds are healed and we can look at things we just couldn’t do before.

But I think we can get a little more creative than that – I think we can go way back and find out about our ancestry, our forefathers, those that came before us who we know very little about.

Turning Back the Clock

In the late 1700’s, my great, great, great, great grandfather, Captain Joseph Hynson, was a double agent in the American War of Independence. He was an American working under Benjamin Franklin, acting as courier with his ears to the ground in Paris. He also went on to become employed by the British.

Entrusted with 8 months’ worth of despatches, Joseph managed to hand them over to his British paymasters and replaced the despatches with blank paper destined for Congress. The heist wasn’t discovered for months. A lot is known of that event, he is mentioned in many historical books and in university literature. You can even Google him to find out more.

What we don’t really know much about is the man himself. I’ve used tarot before to find out about him, what he was like as a spy, as a husband and father and what his journeys were like/ I’ve never taken a single event in his life and explored that – so let’s do it!

This is where the Celtic Cross Spread comes in. And you! Together we can explore this period of his life so you can see how easily you can use the tarot to explore your family history too.

You can read more about Joseph and how I discovered more about his life using the Free Association technique.

I’ve kept to the original Celtic Cross Spread that is published in the Pictorial Key to the Tarot. You may use different position names than the ones I’ve used here – all are okay. The original positions are less important than the new ones we’ll be bringing in. Think of the original tarot spread positions as guides.

Where it was appropriate to change the positions to reflect the past, I have. Some of the staff positions of the Celtic Cross are already appropriate and so I haven’t changed them at all. If you use different position names than Arthur Waite, check to see if they’re still appropriate for your retrospective tarot reading.

You can modify the Celtic Cross Spread more specifically if you want to. I have tried to keep these changes to be a little more generic so that I may use it again in my genealogical explorations – makes me sound like Indiana Jones ;).

A word about the Significator

We often think of using a court card as the significator to represent the person involved. Arthur Waite is clear in the Pictorial Key to the Tarot that we can also use a card to ‘represent the matter’.

If we allow the tarot to designate the ‘signifcator of the matter’ (by drawing a card and not choosing one purposely) we’re gaining a card with extra information that we might not have known about before. It may show you what motivated your ancestor, or what the driving force behind the event was, if it was not of their instigation.

This position also has the potential to clash with other positions in the spread. All of these positions will show nuances between each other and will be related to each other more uniquely than by using the Celtic Cross Spread to determine future events.

(See Part Two of my free Celtic Cross Tutorial for a deeper exploration of the spread positions and their meanings.) 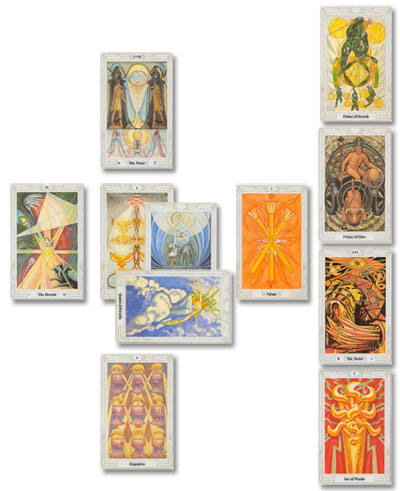 Click on the individual cards for a further exploration of each card in the Tarot Card Meanings section, or use my quick summaries below.

I used the Thoth Tarot deck to find out about the Joseph’s decision to enter the historical world of James Bond and so will be keeping to the subtlety of the different definitions of that deck for this reading.

The Significator – 4 of Cups – Luxury. Was he seduced by the thought of a fabulous lifestyle? He lived in Paris at the time of the theft, all rather high-rolling. Was there also a sense of being locked into this and not having a way out?

I have written about Joseph on my blog before, where I use free association as a technique to help connect with him and his life. This technique is also really helpful in many other ways, defining your own tarot card meanings for one. It comes into its own here though, where you can connect with your ancestor in a non-forced and completely open way.

Reading tarot retrospectively has given me some extra clarity on a specific time and decision of my great, great, great, great grandfather. There were a lot of confirmations in there for me as I have been researching his life and know a good timeline of events.

Reading tarot this way can help us understand past events in a way that we would struggle to do otherwise. It sheds light on events that we have no other way of finding out about and so is a useful way to approach the explorations of our own lives and actions so we can learn from our mistakes and make better decisions for our future.