Is your tarot reading stuck? Can’t see how on earth you’re going to get from the present to the future? Let the Stepping Stones to Success tarot reading method help leapfrog you from being stuck to successful, in a few easy steps.

We’ve all been there, it happened to me this week. You’re looking at a tarot card, and the one next to it and you know it’s where you’ve got to go – but you just don’t know how you’re gonna make it! Well my dear readers, I have the answer for you. It’s called the Stepping Stones to Success Tarot Reading Method. Catchy eh?!

So what are Stepping Stones to Success?

A Stepping Stone is a card that helps you get from one card to another. It’s that simple.

Okay, I know you want more than that and you deserve it. So here it is.

A Stepping Stone Card is an action card, it tells you what you need to do or how you need to act or function. It’s all about doing and is very pro-active.

Using a Stepping Stone is taking the situation under your control and making the best of it by seeking the best outcome – helping to create it instead of waiting for it to happen.

A Stepping Stone Card can be used in any tarot reading but comes into its own when using a pro-active tarot spread such as the Grow Model Tarot Spread or the Logical Levels Tarot Spread. It’s also very useful when you seem to have a great gap between your here and now and the future outcome.

For example, you’re doing a Past, Present & Future reading and while the past was nice, the present hasn’t been so good and yet the future card is a doozey. So what’s the problem with that? You have no idea how you’re gonna go from the dreadful here and now to glorious technicolor in one easy step! What we actually know is, you’re not. Not in one easy step anyway, two maybe, but not one. Your answer is to draw another card, a Stepping Stone.

Using a simple Past, Present & Future spread, you ask about your relationship, things haven’t been going well and you’re arguing a lot. You draw: 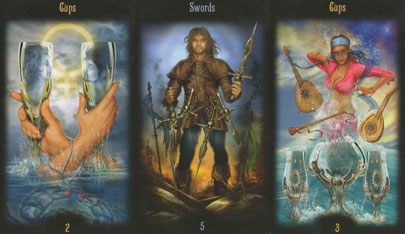 Well that looks very familiar. You fell in love and then you fell out, with each other. There’s a lot of bickering and point scoring and it’s all rather unpleasant right now. The future looks rosy, you like it that the tarot is telling you things will change, you’ll get back on track. Only you don’t really believe it, not based on how things are right now, you just can’t see a way to the 3 of Cups, not without some drastic action or some huge changes.

So what can you do next?

Draw another card. Only this card is going to act as a Stepping Stone between the 5 of Swords and the 3 of Cups. Let’s draw that other card and see what the tarot recommends for some pro-active action: 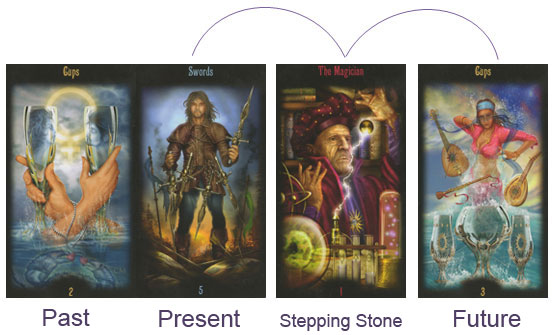 Ooh, what a difference that makes! Here we have the Magician using that negative energy from the 5 of Swords and controlling it, transmuting it. Look how the electricity moves between those instruments and the direction of his hands, his skill and mastery – that’s how we can get from the angsty 5 of Swords to the happy 3 of Cups, by embracing and taking on that very skill and mastery, by becoming the Magician.

To help you embrace or ‘become’ an archetypal card, meditating on that card and journeying into it will help put you in touch with its qualities and essence. Also thinking about how the character in the card would act. If we stay with the Magician as an example, when faced with an everyday situation, before you respond or react, stop for a moment and think about how the Magician would respond to the situation and then align your response accordingly. Extra study of a particular card will also help in understanding it as an archetype or the essence of what you need to embrace.

I haven’t finished with these cards yet though. Look at the movement of the woman in the 3 of Cups – doesn’t she also look like she’s working some magic of her own? Looks to me like she can whip up a storm in a heartbeat. Is it too fanciful to think that by bringing in the archetypal energy, or essence of the Magician, by embracing his skills, they’ll have a lasting effect on the woman, for the better? I think it’s exactly what she needs to do.

By wanting to improve a situation, by seeking a positive outcome and being pro-active about it, it’s possible to change yourself, and therefore your life for the better. I think that’s worth pursuing, and is an attractive way to move forward with your life.

Not at all! Though it’s easy to see the similarities. To be clear, the new card isn’t a bridge, or even a link. It’s a means of getting from one card, or situation, to another by being pro-active and wanting to get involved in the future, not just to find a way to make it easy for you to see more details by linking or bridging the gap.

It’s important that you’re aware of the difference. In a large portion of Tarot readings, you have an outcome card, a prediction or divination. You’re being told what is coming your way. Leaving the debate aside about how much influence you have in effecting a change in your future by deciding to take a different course of action, what I’m proposing here is that you get pro-active and make the changes you need to without waiting for an event to come to you – effectively putting you in control of your life, as much as you possibly can be.

So now that we’re clear about exactly what a Stepping Stone to Success is, and what it isn’t, let’s have a look at it in action in a large spread.

Stepping Stones to Success in a full tarot reading

I recently published the Tarot Elements Past, Present and Future Spread. It’s a souped up version of the old 3 card classic. The Stepping Stones method is perfect for a spread like this one. As a spread, it allows for a lot of creativity and freedom of movement amongst the cards. Once you’ve analysed the cards in their appropriate positions, you can then begin to read them diagonally and horizontally, not just vertically. Let’s have a quick look at what Stepping Stone cards look like on the Past, Present and Future Spread. 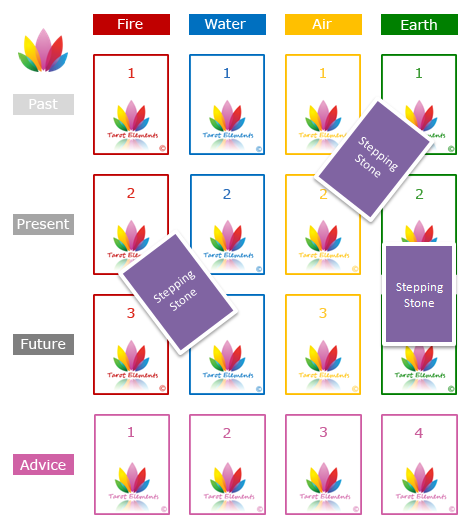 The Major Arcana are very effective Stepping Stones because of their archetypal natures. Where you need to embody an archetype, they’re second to none. If you have split your deck to use in a spread like the Past, Present & Future, I recommend you use the Major Arcana as your first choice. A Minor Arcana card will give you an action, a specific thing you will need to do; whereas a Court Card will either advise you to take on the qualities of that character, or to enlist outside help.

You may have noticed a Stepping Stone card from one of the past positions into the present and may wonder at the relevance of this. This shows the flexibility of this tarot reading method. How many times have you said to yourself, “how did I get here, to this point?” Perhaps you have clients who asked the same question. A Stepping Stone card from the past to the present can show you exactly how you got to the point you’re in, not just how to move into your future, but where you were in your past. This gives you a wonderful spotlight on past events and in doing so highlights areas where you might have made the same mistake again.

Moving diagonally from one area to another, as in the Past, Present and Future Spread, allows you to see how those areas of your life affect the others. Your life isn’t a box or grid of topics, it’s a complex melding of all topics that crisscross, over-lap and affect each other continually. Defining those topics helps to highlight them and look at them in detail, and once you’ve looked individually in detail, you should then look at reading more fluidly across the spread of cards, using Stepping Stones where necessary. They provide you with a lift to your future, one that you can actively participate in, not just witness.

The Stepping Stones to Success Tarot Reading Method was born and defined during a wonderful evening of dinner, tarot readings, spread design and general chit chat with my very good friend Jules Roberts from Living Tarot. It was Jules that really brought this method to life and all serious credit must go to her for her vision, ingenuity and faith in how I would present this method to you.