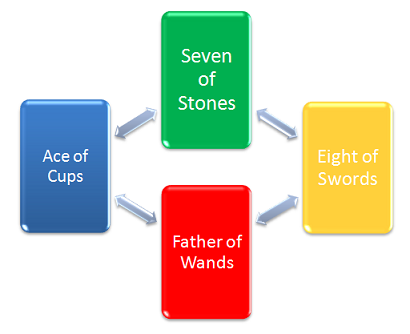 Following on from my post that explored using an elemental base in your Tarot readings, in this post I want to share with you a technique I’ve been working on that expands on that, and also brings into play the use of a significator in Tarot readings.

Normally associated with Tarot Court Cards, a significator is used to represent the client in a Tarot reading. Significators have seen a general decline in popularity in recent times, and I’ve never been a great fan or user of them, as I discussed in my introduction to using the Celtic Cross spread. If we get a little creative though, there are some great uses for a significator in Tarot readings, so long as we leave behind the traditional spreads like the Celtic Cross and opt for something with more room to move.

What I want to show you in this part of the post is how you can effectively see the question the client asks, and the answer from the Tarot, interacting right before your very eyes.

An Example Reading Using The Question As A Significator

A client has a work related problem. They’ve waited a long time for a pay rise and promotion in their role. I’ve used the Seven of Stones (Disks or Pentacles) to represent the question and lay it down as the first card in the Tarot spread.

For the rest of the spread I’m going to just use three cards, for simplicity, without positions. This will allow the Tarot to give an unrestricted message, but will also allow for Elemental Dignities to be applied to the Tarot reading as well.

The question for a situation like this would be centred on finding out why this situation has occurred and could be phrased in the following way:

What is causing me to be overlooked by my company for promotion and a pay rise?

The first Tarot card drawn in response to the question is the Ace of Cups. This looks like a good omen for the client as it could show a promotion on the way, but I prefer to say that in this situation, the Ace of Cups could indicate that she has been noticed by management; the water flowing into the cup for me indicates a connection, usually to a higher power when looked at spiritually. Keeping within the confines of an everyday situation, this connection then becomes relative to the client’s position – her managers. I also like to think of this water connection in reverse, rather like a two-way street. She has worked hard to make her own connection, and it shows, she has been noticed.

Her problem begins with the next card drawn, the Eight of Swords, and I’m placing it to the right of the significator as I want you to see how this has now become a three card combination, with the question right in the middle of the answer, interacting with the cards either side of it. Commonly called Interference, the Eight of Swords indicates just that – either internal or external. I feel in this situation, the interference is external. She has made tremendous efforts to be noticed and so I don’t feel this is self-sabotage. This also then begs the question ‘interference from whom?’

So what do we have so far? Dissatisfaction at work, a lack of promotion or recognition but with some hope on the horizon. That recognition seems to be in place but there is a spanner in the works as it would seem that someone or something, is interfering with the client’s efforts of a reward for that recognition. It’s time to draw another card to help find out who or what is responsible for the blockages around the client.

Ah, and now we’re getting somewhere! The final Tarot card drawn is the Father of Wands, no doubt a work colleague or even a boss. This is the missing piece to the puzzle and has concluded the reading with the knowledge that a male colleague is the reason the client is feeling frustrated at the lack of recognition and promotion.

In addition to finding out the cause of the client’s problem, we can still have a little more fun with this and explore this reading using Elemental Dignities. The Father of Wands came out of the deck straight after the Eight of Swords, and would sit directly next to it in a linear spread. In fact these four cards now form a circle – perfect for Elemental Dignities.

A quick recap of how Elemental Dignities work:

Elemental Dignities are usually read in triplets, that is three Tarot cards at a time. The middle card is called the Principal card, and it’s here where you should begin your assessment. The cards either side of the principal card are called the Moderators and they will either support the principal card or weaken it. By assessing the cards in this way, we are seeking to find the strongest card as our focus will shift onto that instead of the principal card if it turns out to be a moderator instead. Finding the strongest and weakest Tarot cards in the triplet will help to add extra depth to the reading, as their divinitory definitions or meanings will either be reinforced or as I like to call it – levelled.

If you’re unfamiliar with Elemental Dignities, there are some guidelines you need to be aware of when you read this way:

Having looked at the guidelines, let’s now look at the Elemental Dignities of this Tarot reading:

The earth and water are supporting each other, reaffirming that the client is doing good work, and has been noticed for it. The air is an enemy of the earth and is causing problems with it (the interference). At the bottom of the circle is our alleged culprit, the fire and the Father of Wands. Confirming his skullduggery is his supporting relationship to the air and his inimical one with the water – the recognition. Examining the water and air elements will also provide the same analysis. The four elements would seem to agree with my original interpretation.

Using The Question As An Elemental Base And Significator

At the beginning of this post, I said there were some great uses for a significator in your Tarot readings, so long as we got a little creative in the process. I talked about the post I had written that introduced the idea of adding an elemental base to your Tarot readings. I want to get a little creative now and swap that base element for the actual Tarot card that represented the question I looked at earlier, so you can see from another angle how the same cards interact with that question.

The first thing you have to do is take the new significator card, the Seven of Stones, out of the middle of the current reading and set it aside while you explore the Elemental Dignities of this now linear triplet.

The Eight of Swords is the clear winner as air is actively supported by the fire of the Father of Wands and is neutral to the water of the Ace of Cups. In this section there is nothing more to add to that – the interference is still so far the overriding factor in the client’s problem. The next stage is to add the question card as the elemental base and see how that interacts with Elemental Dignities above.

Adding The Question As An Elemental Base And Significator

Whenever you add an extra card, either a significator or elemental base to a set of cards already analysed by Elemental Dignities, they will change. This will also happen now I have added the Tarot card representing the question in this Tarot reading – the new significator, the Seven of Stones.

The first thing to strike me about the new elemental interactions is how the principal card of air is at odds with the earth. This is actually good news for the client as despite the continued support from the fire (which is also neutral to the earth), air and earth weaken each other. This can be reworded to say that the client’s problem of interference is brought down to earth, making it more manageable. The earth is also supporting the water which reinforces the interpretation that she has indeed been noticed and now has more control over this situation than she was first aware of.

Let’s look at the Father of Wands now, the man I earlier suggested was interfering with her chance of promotion and pay rise. As the fire element, he is actively supporting the air. With earth as the base he is neutral to it and so unaffected by it, but still connected to it. I’m still going to come out on the side of the client and say this man is the cause of her problems. He will have is own agenda as to why he is blocking her, but she should be encouraged that by checking the Elemental Dignities of this Tarot spread, they actually showed she has more power and control over her situation than she realised, and that she needs to be less passive and more proactive; taking her problem or direct request to higher management for consideration.

When The Elements Are Balanced And You Have To Call It

In some sense these are a difficult set of Elemental Dignities to call. There are two clear sets of elements that support each other and yet are also inimical to each other – a balance really. While that’s what we are seeking to achieve in life, in Elemental Dignities, balanced elements don’t necessarily help the Tarot reader in working out the most prominent card(s).

That isn’t good enough for the client though and as their Tarot reader, you have to call it. My own choice of the Father of Wands as the root of her problems is based on my divinatory interpretation; and the air and fire elements being active over the passive earth and water – dominance in a way, and the reason the client must find her voice and raise her game. My other reason was pure intuition. When you analyse so technically and so academically, you mustn’t ever forget your intuition. It would be your guide without Elemental Dignities, and it must remain your guide with them.

The Benefits of Using The Question As The Significator

Using the question as a significator in this Tarot reading showed you how you can really interact with the Tarot, bringing your questions and answers together in the same place; seeing them as the sum parts of the whole, instead of seeing them as separate from each other. This allows you to take stock and establish your position, and decide on the best course of action to redress the imbalance.

Applying Elemental Dignities to this Tarot reading confirmed my original interpretation, but also added some extra depth in the process; and using the question as the elemental base also threw some extra light on the situation, showing the client had more clout than she had realised – a lot was gained from four Tarot cards without even going too much into their divinatory definitions or meanings.

I hope you enjoyed this post and exploring my ideas with me. It would be great to hear how you get on with trying this exercise for yourself; please feel free to contact me or share your experiences.