Guest post by Zorian Cross
This spread was created about a couple of years ago. I was dumped by a guy I was having a long distant relationship with. He had issues regarding commitment and claimed I was suffocating him and he needed his space (he was two continents apart from me, how much space did he need?). So in a fiery fit of rage, I turned to my cards and began organically pulling cards one after another, asking questions randomly. While doing so, some of the cards revealed such cheeky yet witty answers to those questions that I couldn’t help but laugh out loud. So hard I laughed, I could feel the tears of joy falling down my cheeks.

So then I thought, there are so many tarot spreads that are all about looking for love, understanding relationships, and discovering Karmic roots of relationships. But what about when a relationship breaks? What about when you were dumped outta the blue for no reason what so ever and are so filled with anger that you just wanna bitch-slap someone? What about when someone has been so unfair to you and treated you so horribly, that all the healing and ‘bigger-person’ spreads just seem too vague and unhelpful.

Sometimes You Gotta Get it Off Your Chest!

Sometimes the best way to get deal with a messy break up of any kind is to be with your friends and just vent and bitch about the jerk/bitch that broke your heart. It may not be the ‘light’ thing to do, but God(dess) it feels oh so good to get all that angst outta your chest. I dunno about you, but I consider Tarot to be one of my closest friends ever! Hell, I’ve been reading Tarot since about 15 years, that’s longer than most friendships even last! So why not let Tarot be that best friend one can vent to when your heart has been broken. After all, we ask all sorts of questions from the Tarot (from when we’ll find true love to our spiritual mission in life), so why not let it be a sounding board for all our angst and venting, but allow it to offer us valuable insight into our situation, allowing us to laugh and heal at the same time.

And with that, I present the Karmic Bitch-slap Tarot Spread 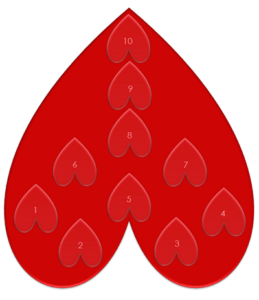 And the reading I did that day?

This is about a guy I dated briefly during the end of 2008, and we broke off just a week before Valentines Day in 2009 (What a Tool right? Hence His name in the reading is Mr.T – short for Mr. Tool)

Why was I stupid enough to fall for the biatch/jerk in the first place?
Justice
At first I didn’t understand this card appearing here, but then I realized that Justice is associated with Libra, which is also my rising sign, which unfortunately leads me to falling in love with love, which like Rodgers and Hart wrote, is clearly falling for make-believe. Doing so lead me to believe I needed a partner to make me feel whole and complete from within, and I guess that lead me to be borderline desperate for someone special in my life. And well, when one is desperate for anything, they sometimes make rash and silly decisions that they later on regret. Such as dating Mr.T.

What was I thinking?
6 of Wands
*Sigh*.. I thought he was my knight in shining armour. My Prince charming who’d ride into town and sweep me off my feet and take me far far away and make me his Princess. It was only afterwards did I realize that ‘Princes’ are raised to be charming, but never really sincere.

What was the actual reason the biatch/jerk did what they did?
Judgement
When I saw the card I burst out into laughter. Of course he felt ‘judged’ – the guy was a total paranoid closet case who was completely uncomfortable with his sexuality. In India, being gay is rather hard, as not only is it frowned upon, but up until a few months ago, it was considered ‘illegal’ and people caught ‘being gay’ would be imprisoned for up to 5-10 years or so. Not to mention all the harassment that’s inflicted upon gay men and their families and loved ones. I had the good fortune to be in a family that loved and accepted me when I came out to them, and hence wore my sexuality like the fabulous rainbow it is. I was an out and proud gay man, while he was a major closet case and most of the time, denied he was truly gay. He claimed to be Bi (the kind of ‘Bi’ guys who have never ever been with a woman, but still hold onto the label of being Bi because they feel like Hannah Montanna – “You get the best of both worlds”). He was so scared of being ‘judged’ that he wouldn’t even hold my hand while we walked down the street, let alone hug (hug, not even kiss) me if in public. Issues!

What were their true feelings for me throughout the period of the relationship?
7 of Wands
Well, the first thing that ‘flashed’ in my mind was that he was only in it for the sex. Not that I wanna brag or anything, but I have been doing Yoga for over 2 years now, so that kinda gives me the advantage to ‘experiment’ a whole lot. And well, it was a very torrid sexual affair we had. However, looking at the card more closely, it almost seems like throughout the relationship, he kept on ‘fighting’ me off every time I asked him where our r/s was heading. He would send me mixed messages, claiming that he didn’t want to ruin our ‘special bond’ by giving it a ‘definition’. He wanted to be known as a ‘special someone’ rather than my boyfriend (WTF is that all about?)

How do I deal with this?
Ace of Swords
Well, like my wonderful friend Shashank told me, I need to take charge of the situation and not let him control me in any which way. You see, after we had broken up, Mr.T would keep calling me, trying to get me back in the sack, without any strings attached. Being the Capricorn that I am, I channelled my inner Ice-Queen-Frosty-Bitch persona (that’s as icy as the blades of a sword), and castrated him verbally as I told him what bodily waste he could eat and die :D. Furthermore, I refused to let myself feel emotionally low about the whole situation. Come to think of it, even though he did just use me for sex, at least I can live with the ego boost that I’m fantastic in bed! How do I know this? 8 months later he still calls… I never answer.

What are the Karmic Lessons I need to learn from all this?
Hierophant
Hierophant being my Soul Card, to me this shows that I need to have more faith in myself, as well as realize that the most important relationship that I need in my life is the relationship I have with my self on a body, mind, and spirit level. After all, the (desperate) need to have someone special in my life led me to make some of the biggest mistakes relationship-wise. Since this relationship ended, I began taking better care of myself. From working out more often, to following a healthy diet, to even meditating and spending more time connecting to my spiritual side, rather than waiting desperately for Prince Charming to come into my life.

What is the Karmic Bitch-slap they shall receive?
King of Pentacles
Lol… well, you see, just the other day, I met up with a friend of mine for coffee, and I saw Mr.T. He was looking sad, lonely, and dejected with life. He saw me and walked up, and I was my usual pleasant yet distant self with him. Afterwards he sent me a text claiming how lovely I looked, and how much he missed the time we spent together. I realized that during our time together, he was so obsessed with his career that he always put that ahead of everything else in his life, including his own family. So in a way, his Karmic Bitch-slap is to be one of those guys who achieve a whole lot in life on a material level, but clearly end up being alone and dejected. (Serves him right.. tee hee)

Advice for me to heal myself?
5 of Wands
Well, to put it simply, this card was clearly telling me that I shouldn’t have to beat myself up because of this failed relationship. You see, Mr.T always made me feel guilty, as though everything was my fault (which I later learned is standard practice for all manipulators). And initially when the relationship failed, I blamed myself and beat myself a whole lot about it. Till my best friend (Shashank) made me realize that at the end of the day, he was the one who behaved like a tool, and he was the one who was emotionally cold and distant towards me. My only fault was that I loved him (or at least loved the notion of him). And thus with that I began treating myself better and moved on.

What the future holds for my heart?
Chariot
Well, this is quite lovely. Someone who truly loves me would come and sweep me off my feet and we’ll live happily ever after (okay, way too much wishful thinking). However, after closer examination of the card, I realized that now rather than being so quick to jump into a relationship, I’ll be careful before giving my heart away. Chariot being related to the sign of Cancer (the sign that never makes the first move and always thinks numerous chess board like strategies before getting involved deeper), I now see these qualities in me. I learned through subtle ways how to ‘test’ the men who approach me romantically, and be able to decipher how ‘noble’ their intentions are before giving myself away to them.

Empowering Message or Mantra I should live by!
7 of Cups
This fits me well, because after this entire debacle, I realized that life is too short, and I’m way too young and fabulous to just stay with one person who is being a jerk to me. There are plenty of fish (or cups) in the sea, and I can sample all the various flavours at my ease. Rather than search for my Prince, I can let him search for me, while I have fun and enjoy myself. Incidentally, a couple of months after Mr.T and I split. I had a romantic fling with two yummy French boys, a cute Italian guy, and a very very yummy Swede! I earlier on never allowed myself to have ‘fun’, but now, I live each day to the fullest, and I enjoy myself without any feelings of ‘guilt’ coming in the way :D
Zorian Cross