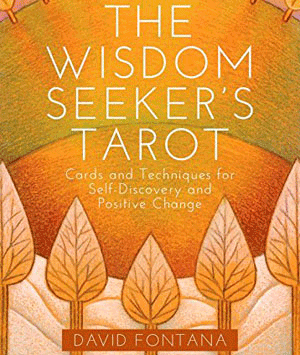 While the Wisdom Seeker’s Tarot is a new presentation, the deck and accompanying book have been around for a number of years. Brought to us by Waktins Publishing, it was originally called the Path Seeker’s Tarot, then the Truth Seeker’s Tarot. The book is written by the late psychologist, David Fontana; the commissioned artwork, by Sylvie Daigneault. The author’s intention with this kit is to remove the tarot from the genre of fortune-telling, allowing the reader to seek the wisdom within.

In the Wisdom Seeker’s Tarot, there has been more than just a name change. The first two kits had gilt decoration on the cards. When I first discovered this, I ordered a copy of the Truth Seeker’s Tarot because, gilt! Both sets are quite lovely.

While the cards have a little more bend than their predecessors, the card stock is good. The stacked deck is quite a handful in my small hands but I prefer that over thin cards that sit well. The artwork is pleasant and Daigneault does a good job in portraying the central themes and meanings of the cards. They sit nice together in spreads and don’t compete for attention or subdue their neighbours.

The Major Arcana follows the order we are used to and the numbering of Strength and Justice is eight and eleven respectively. The Minor Arcana suits give us some differences and it is here where some people may come unstuck. The Wisdom Seeker’s Tarot has what is known as switched elements.

The most common association of the four elements with the Minor Arcana is:

The Wisdom Seeker’s Tarot has the following pairings:

The colouring of the pip cards didn’t follow the elemental switch, and it might add to the confusion, however, as you’ll see at the end of this review, this might in fact be its saving grace.

Staying with the Minor Arcana cards for the moment, let’s look at the the numbered cards themselves, otherwise known as the pips. They are not fully illustrated in the same way as the Rider or its clones. Building from a Tarot de Marseille base, the pip cards in the Wisdom Seeker’s Tarot are a nice combination of the two – part story, part emblem numbering.

Rather than follow the older traditions of handed-down card definitions as Etteilla did with his pips, David Fontana favours numerology in determining his tarot card meanings. I’m not against this approach, in fact I like it. Jane Lyle did this in the Renaissance Tarot as did Nigel Jackson in his Medieval Enchantment Tarot.

It is also interesting to note that Nigel Jackson also switches the Wands and Swords elements and you may find his writings make more sense to you, if you can still obtain a copy of his out-of-print deck.

A deck needs a structure or theme and using numerology works well with the pip cards and it’s here where the blend of the Tarot de Marseille comes in. Although exploring a number of Tarot de Marseille decks did not reconcile the tarot card meanings in David Fontana’s little white book to this old system.

As a psychologist, it’s no surprise that David Fontana favours the Fool’s Journey as his way to express the Major Arcana. He explains this concept in the little white book and leaves the exploration of the individual cards with a question to ask yourself, as related to the card and your journey through life.

Working With the Wisdom Seeker’s Tarot

There are three tarot spreads presented in the little white book, and I found the Tree of Life Tarot Spread particularly useful when read as a snapshot of my own spiritual journey and position, as it is presented in the little white book. As a snapshot, this spread is really rather good, and showed me where I am judgemental and lacking in compassion. Ouch!

The other two spreads included are the age old Seven-Card Horseshoe Spread and an adapted Celtic Cross Spread. The author does mention that the Horseshoe Spread can be reduced in number to five or even three cards and he expands on this further in his book, The Essential Guide to the Tarot.

The Celtic Cross Spread has had more than a facelift, it has been culled. The cross is present, albeit with different names for the card positions, but the staff is completely missing. I thought it was an interesting choice of spread to use as the Celtic Cross Spread does fall into the genre of fortune-telling and prediction. It can and has been adapted by many authors over the years, to great effect. While the author has tried to make his version of the spread all about insight, and despite removing the staff, his explanation of his new spread positions still comes under the banner of divination.. suits me.

The Wisdom’s Seeker’s Tarot is a pretty deck and I like the cards very much. I’m less keen on David Fontana’s written work, with this kit. He has drawn from a wide pool of knowledge: myth, psychology, divination, numerology et al, and attempted to reduce it to a concise offering that seems to me to miss the mark, for the beginner at least. For the more experienced reader, you may just find yourself disagreeing with him; though a better exercise would be to allow your mind to wander into his world and expand your own.

If you have a desire for self-exploration and tarot, you could pair this deck with books by other authors who focus more sharply on their subject. I would recommend Toni Gilbert’s Messages from the Archetypes. Toni uses the Rider in her tarot card meanings but she also shows you a useful way to approach the cards from a transpersonal perspective.

As a new or beginning tarot reader, this kit would work very well with Sarah Bartlett’s excellent, The Key to Tarot. Again this is a Rider based book, but having checked through a number of card definitions, I feel it is a good match to the Wisdom Seeker’s Tarot. It also contains a number of exercises to help gain an understanding of tarot. Read my review of the Key to Tarot for further information.

While it may seem that I have taken more issue with this kit than others that I’ve reviewed, I have found value with it and received a nice response from my Instagram followers when I’ve shared daily readings using it. People responded positively to the images on the cards, as well as the interpretations of the cards drawn, which I tried to keep within David Fontana’s vision.
Not all tarot decks gel with everyone, and the switched elements may continue to plague this polished kit. However, in not switching the colours with the elements, either David Fontana, Sylvie Daigneault, or indeed the publisher, may have managed to make this deck useful in its own right – in keeping the colour of the pip cards traditional, this flexible deck is usable across the board.

Some authors say “throw away the little white book, pick up the deck and interpret the cards using your own intuition.” You can certainly do this with the Wisdom Seeker’s Tarot. Have fun!

Also by David Fontana: The Essential Guide to the Tarot