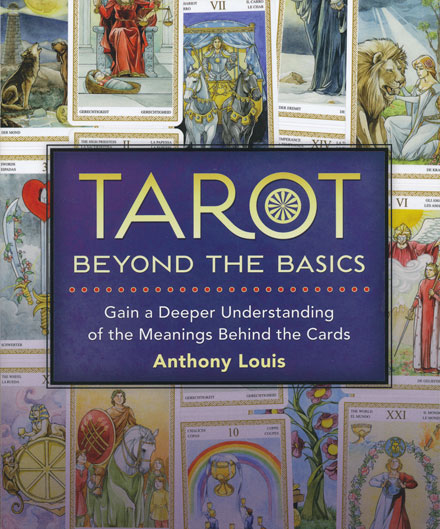 A number of tarot books are published every year and while they serve the market well, not many really break rank from the tried and tested formula of presenting to the new tarot reader. Tarot books that speak to the intermediate or advanced tarot reader are not easy to find, or are limited to focusing on a single subject within the genre. Until now.

Tarot Beyond the Basics breaks the mould and sets a new standard. Prior to this excellent work, my own go-to books have been Theresa Michelson’s The Complete Tarot Reader, Liz Hazel’s Tarot Decoded, and the time-honoured 78 Degrees of Wisdom by Rachel Pollack.

What makes Tarot Beyond the Basics so good?

Firstly, it’s written by Anthony Louis. This quiet but knowledgeable man wrote what is arguably one of the most read tarot books ever written, Tarot Plain and Simple. A psychiatrist by day, and astrologer and tarot reader by night, Louis brings his academic training to an audience overrun by tarot counselling, psychology, Carl Jung and a host of other healing modalities infused with tarot. He takes tarot back to its roots, and beyond, to the influences from Ancient Greece, Pythagorus and Plato.

He begins with an exploration of tarot history, and skillfully entwines the theories of paper and card history from China to the Mamluk empire and subsequent development of tarocchi in Europe during the Renaissance.

We are then treated to a sensible and logical exploration of the Celtic Cross with views and ideas that are fresh and intriguing as well as using Arthur Waite’s explanation from the Pictorial Key to the Tarot as his base. This chapter is brought to life with the sharing of a real life tarot reading with one of Louis’ clients.

Chapter Two is worth the price of the book alone – Astrology 101 for Tarot Readers. Louis brings decades of study and practice into forty-two pages of clearly written explanations of the planets, zodiac, the houses, decans and how they all relate to the tarot and how they were married together. This is not new information, but the presenting of complex ideas into readable and understandable writing is a skill in itself and Louis does it well.

All killer and no filler, plus a surprise…

The remaining topics covered in this book include the Topsy-Turvy World of Tarot Reversals, The Role of Intuition in Divination, Number Symbolism and the Tarot, the Four Elements, the Elemental Personalities of the Court Cards, the Major Arcana and the Anatomy of the Four Suits. He gives tables for attributes to the cards including astrology, numerology, keywords, astrology, the elements – it’s a long list. Included also at the back is the original Pictorial Key to the Tarot explanation of the Celtic Cross, a spread close to my heart.

Stand out chapters for me included the Elemental Personalities of the Court Cards, because who doesn’t have trouble with that lovely group of people? Louis explores them of course through their elements, but then also writes about each one individually. He then goes on to discuss the roles the Golden Dawn attributed to these cards including the enigma of the Knight/King roles that cause so much confusion to the new (and often experienced) reader.

And my favourite section, for its sheer brilliance, uniqueness and out-of-the-box thinking, is the Elemental Algebra in the chapter, the Four Elements. I’ve never seen this before and I loved it. It’s not elemental dignities, which Louis does cover, but an elemental look at a reading without using the definitions of the cards themselves. This is not a new way to read the elements, though it’s very niche. What’s good about this is how it’s presented, as algebra. Don’t be alarmed into thinking it’s complicated, far from it. Louis has simplified the whole process and made it easy. It’s an inspired move and it deserves high praise.

There is a lot more I could say about this groundbreaking book, but I’ll leave the exploring you to. Buy this book, today, if you haven’t already. Even if you’re a beginner, there is material in here that will assist you right now, and for the seasoned pro – you need it.

For me, it’s the book I never wrote and the posts that never came to be. But for Louis, it’s his magnum opus and has surely set his place at the high table of modern tarot writers and inlfuencers, and I couldn’t be happier for this quiet, charming and knowledgeable gent.