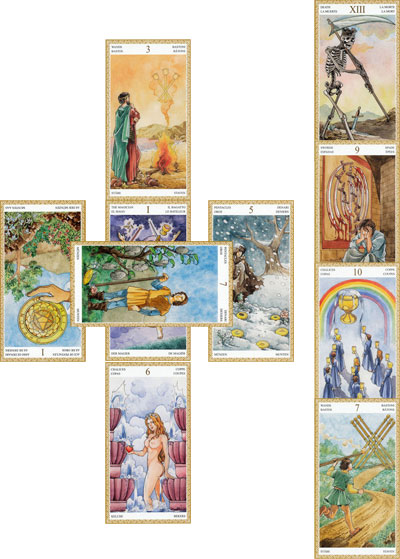 Indicators of Success are tarot reading methods & techniques that help you obtain secondary information from your reading. They include: the elements, numerology, the card ratio, court cards & tarot card reversals.

So what else can we do for our client? Is there any more information to be gleaned from these ten tarot cards? You bet! I’m going to introduce to you now two extra ways of finding out more information from these same ten cards. The first is called the card ratio, and the second is elemental influences, and we will see how, through the card ratio and the use of the elements, we can dig deeper into the Celtic Cross Tarot Spread and put the finishing touches to your readings.

The card ratio simply looks at how many of each type of card is present: how many major arcana, how many minors, court cards, aces, reversals and the numerology of the cards; even the ratio of elements will paint a clearer picture for us.

A majority of any one of the elements indicates the following:

“You can learn more about the raw elements and how they translate into the minor arcana suits and the aces in The Four Elements and the Tarot Aces.

One often overlooked aspect of Elemental Influences is the missing element. Simply put, this means that whatever element is missing or is in a low ratio to the others, shows what attribute is missing from the client’s situation.

For example, if there were little or no Swords (Air), we would say that very little thought has gone into the decision making process; or that the client, or someone around them is acting irrationally or illogically, communication would also be a problem area.

Conversely, a lack of Cups (Water) and we can be looking at a cold situation, one devoid of emotion; one where logic perhaps has won the day.

A lack of Wands (Fire) can show lethargy and inaction; or a lack of energy required to see the client through. Certainly a lack of will or apathy will be strongly suggested.

And finally, a lack of Pentacles (Earth) can show an unstable situation, one that is ‘pie in the sky’ or perhaps is showing something that is still being worked out and hasn’t actually taken form yet.

Timing in the Cards

In terms of timing and the outcome cards, for a loose indicator of time, use the attributes of the elements as opposed to the more detailed and time specific astrological decanates system. You only need to remember the following:

For those of you interested in learning more about the astrological decanates and other detailed methods of timing, I wrote a thorough and detailed post about the Golden Dawn’s astrological system which includes the planets, zodiac signs, pages/princesses, aces, court cards, thematic timing and the traditional system using days, weeks and the seasons. See Timing Events Using Tarot and Astrology, be sure to bookmark it.

The card ratio for this reading is as follows:

A quick scan of the information above tells us that the client has a lot of influence on the outcome, their decisions have directly contributed to their present situation; and while ordinarily, the situation will remain under their control, we cannot ignore that outcome card – Death. The new business project is likely to fail despite their best efforts.

We naturally have to ask how that can be when the card ratio has shown us that the client seems to be in the driving seat. Quite simply because of the decisions they made, cause and effect. We can actually name the Seven of Cups as the point where it went wrong; the client simply chose the wrong option out of all that were available. Of course coupled with the spanner in the works, the Seven of Disks, and our client seems to be fighting a losing battle.

No-one else was involved in their decision making process (no court cards) and there was little outside influence (only 2 Major Arcana). Elementally the cards are balanced and so despite a sterling effort and commitment from our client, it just wasn’t the right call; and is one that they can do very little about, if anything. Interestingly, two of the three outcome cards are Earth (the negative outcome cards too), indicating non-action, or very little movement, further confirming the likelihood of failure for this particular endeavour. The ratio of the elements in terms of their attributes – active vs. passive is 4-6 respectively; further confirming that the business isn’t likely to go anywhere long term. Indeed, will it even get off the ground? Realism indeed.

There is one further thing to examine in this summary, and that is the Numerology. Earlier we noted that there are three 7’s in this spread; and following the card ratio, we know they have significance. I don’t buy into the Golden Dawn’s advisory of multiple numbers signifying exact events; in this case, the three 7’s treaties and contracts (which actually could be taken as a good or bad omen for our client, this being a reading based on business).

I do accept numerology though and without a tarot spin being placed on the number 7, universally it’s seen as very spiritual. So how do we translate that for our client when we have three of them in this spread? My own interpretation would be to advise the querent that the timing would be wrong for a business venture; that on a personal level, there is a transformation ahead (Death) which will guide them to a more spiritual path (the three 7’s); and while this reading promises no guarantee of a career or business ahead in that direction; for purely personal and spiritual reasons alone, it’s a direction that the tarot is strongly indicating they pursue.

There are times when the client pushes for more, and so it’s not unusual to draw some extra cards for further insight into the client’s future or situation; and I suggest if you are going to do this, then use the three cards that naturally come out next, maintaining the sequence. The best way to read these three cards is with elemental dignities. For those of you unfamiliar with this system, please refer to my Elemental Dignities tutorials where you can learn about how to apply them to your own readings. Though not essential to this tutorial series on the Celtic Cross Tarot Spread, they enrich any reading and are well worth the short time and effort it takes to begin to understand them, their uses and benefits.

So, in answer to critics of the Celtic Cross Tarot Spread, I believe its merits have been shown here. While it does have some limitations, it’s still an excellent tarot spread for answering specific questions, especially when you bring in other systems and methods of reading and analysing the cards. A great level of understanding can be achieved examining the client’s life, or query in this way. I think that has been shown despite the fact that we didn’t explore the meanings of the cards so much. As I said in the second post, Positions and Their Meanings, examining these cards in great depth wasn’t the purpose of this tutorial series; they were given as a means to highlight where and how to gain extra information during a tarot reading.

It would be an excellent exercise for you to use the same cards as practice, so you can build on what I have begun here; or indeed, to read them completely fresh and then compare our differences. Either way it provides a great opportunity for you to practice these techniques in this spread, not forgetting that they are fully transferable to other types of spreads as the techniques stay with you, not the spread.

As a side note, you can apply the Card Ratio at the beginning or end of the reading. I don’t believe there is a right or wrong way. Checking at the beginning can help you quickly assess the situation; but if you’re one to hit the ground running, you may leave your assessment until the end to confirm your interpretation, or enrich it.

Not sure about a tarot reading you’ve done? Do some of the cards look out of place, or not make sense to you? Sometimes we are too close to a situation to see clearly..

Let me go over your reading with you and see what else we can pull from the spread. If looks like you’ve got it nailed, I’ll show you some other reading techniques that you can apply to your future tarot readings. £20 for 30 minutes over Skype or Zoom, or via email through a number of emails to allow for interaction, language differences & keeping a record of new information.

9 thoughts on “The Celtic Cross Tarot Spread Indicators of Success”