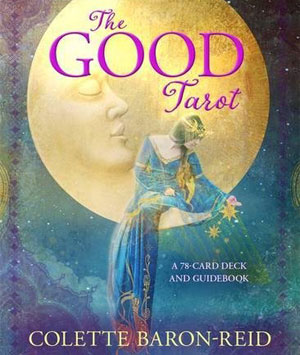 Based on positive psychology, the Good Tarot seeks to help you find the best of every situation; or as Colette Baron-Reid puts it: “for the highest good of all”.

Some might argue that life is more thorns than roses and yes, life can be like that but what the Good Tarot seeks to do is help you find the best solutions to those problems rather than linger on the problem itself.

According to the Good Tarot, he’d be right. And I quite agree.

I’ve been undergoing a spiritual renaissance, including my tarot practice, how I see tarot and divination in general.

So the Good Tarot, and Colette Baron-Reid’s Spirit-centered approach to life dropped into my life at just the right time. My experience with the Good Tarot is purely positive. However, this deck is not without its detractors.

Criticism of the Good Tarot

I’ve read lots of criticism about the Good Tarot from the plethora of reviews already out there, mostly on Amazon. I can agree with a lot of them, if we are talking about traditional tarot.

Within that paradigm, the Good Tarot at times feels confused about certain cards and their definitions. I think the answer to this lay in the minor arcana being rooted in numerology rather than inherited meanings from tradition.

What cannot be argued against is that The Good Tarot is a stunning and evocative deck of cards.

Click on any image to see their full size and detail, including descriptions from the Good Tarot guidebook.

Changes in the Good Tarot

A number of the major arcana cards have been renamed in this deck, which is not unusual in itself for re-workings or new imaginings of the tarot.

The tarot card name changes include:

The minor arcana suits have been changed to represent their associated elements, namely:

You will also find a change in the court cards. The Knights have been renamed as Messengers, a role traditionally assigned to the Pages. It’s a fair criticism but easily overcome.

Understanding the Good Tarot Through the 8 of Air

This card, I believe, shows us exactly where Colette Baron-Reid was coming from in basing this deck on positive psychology. For me, this is one of the best cards in the deck and also incorporates the Rule of 2 talked about by Tarot Eon author, Douglas Gibb, which I explain in my Vision Spread. Namely, a seemingly difficult or negative card can also have a positive and proactive message if you find the action to take held within the meaning. A great example of this is the 3 of Air (Swords) from the Gaian Tarot.

If we look at the traditional 8 of Swords we see restriction. But this 8 of Air advises us to lift ourselves above the clouds of confusion and gain clarity. This way of looking at the 8 of Air is the essence of the Good Tarot.

The Good Tarot as an Oracle Deck

Some people seem to naturally connect to spirit or their guides without aides or tools. Most of us need both to at least get us on the right road to connecting. A tarot deck has many uses but it can become a crutch and while first picked up to help us with our lives, physical and spiritual, I believe it can sometimes hinder our ability to make a further or deeper connection to Spirit and the spiritual world.

Certainly Colette Baron-Reid’s brand of oracle is to help deepen that connection which involves trust in the divine, that which seems to be outside of ourselves but when truly felt, comes from within. We are the portal. Stripping away some of the tarot card meanings to their essence, as the author has done either by herself or in connection with Spirit, allows the process of trusting and co-creating to occur.

This is a different approach for tarot, but it is the approach of Colette Baron-Reid, and her tarot deck does work well as an intimate and private tool for personal consultation.

The Daily Tarot Card and the Tarot Journal

As a daily tarot card, the affirmations written for each card become a meditative guide, one that if you sit quietly with for even a short while will open the way for the connection to Spirit to unfurl and for the message to become embodied within.

If you add your daily cards to each other as you draw them, you begin to see a deeper communication growing as the week moves on. Seeing two or three cards together and how they are related to your week so far gives you openings to the bigger picture of your life at that time.

It is helpful to make notes about these cards, so if you keep a tarot journal, get yourself a new one just for this deck.
For me, insights and inspirations came quickly, they may for you too. Journaling helped me capture those nuggets.*

Colette Baron-Reid is not the first author to create a tarot deck different from the traditional decks, but if we stop for a moment to consider what exactly is a traditional tarot deck, we are met with a sizeable number of traditions, all differing from each other.

The Good Tarot is not a traditional tarot deck but if you allow yourself to see it for itself, I’m quite certain you will experience Spirit moving in your life as the authors intended.
All you have to do is go with the flow of Spirit and trust in the process.

*I love the books by Paperblanks, not only are they exquisitely beautiful, the paper is high quality and copes with my fountain pen with no bleeds or showing through the other side.