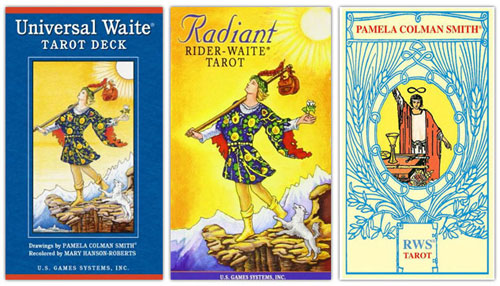 All versions of the RWS are rooted in one tarot deck, though it is a deck of many early versions and printings and this causes us lots of problems when we see what is available today. First published in December 1909, this new tarot was to become know many years later as the Pamela A deck, and for a modern reader, would be as hard to find as Solomon’s Gold.

If you are interested in the history of this deck and comparing the many early variations of its printing including copyright issues, I have provided relevant links at the end of this article that will help you determine the difference between the versions you may already own, or perhaps are interested in buying.

US Games produce what they call the ‘Original’ Rider deck but unfortunately, in my mind, they have ruined this deck with poor colouring and printing. There are two ‘originals’ to choose from: Original Rider Waite (navy blue box), which is taken from the Pamela C deck and is a poor rendition of the actual original – stay away from it; and the Original Rider Tarot (yellow box), which uses the Pamela A line drawings, but still comes with inaccurate colouring compared to that earlier deck. Modern printings of the Rider Waite-Smith also come from European publishers AGMuller and Lo Scarabeo.

Please pay attention to the different titles used for this deck over the years, even from the same publishers. Saying the deck is original is not a lie, but it is misleading when you learn of the various early versions of the deck and see how different they look. It’s a marketing ploy that has served US Games extremely well over the years.

The Original Rider Tarot (US Games) sometimes says it is the 1971 edition. This means it’s based on the US Games first printing of the deck after they obtained a licence from the Rider company (the printers of the earlier and first decks).

According to tarot scholar and historian, Frank Jensen, Waddington’s printed a version for the Rider Company during the 1960s up until 1971. We see AGMuller take over this printing from 1972. Both of these decks are facsimiles of the ‘Pamela A’ 2nd edition. Unfortunately these 1970s decks are no longer in print. Copies can be obtained on Ebay and the prices range from £40 – £300. It comes in a blue box where the lid lifts off, not the envelope type of box of modern reprints. I have two of these decks and the biggest difference between this and the US Games ‘1971’ edition apart from the colour anomalies is the card stock. The Waddington and AGMuller 1970s cards have a matt finish, not gloss, and it makes a massive difference to the visual hit of the cards. Matt printing subdues the colours a little and creates an air of authenticity not present on the modern printings.

The US Games Smith-Waite Centennial Edition Tarot Deck to me was a horror show. What a wasted opportunity to finally get the colouring right and produce a faithful reproduction of the early deck. Perhaps in an effort to cut corners (who knows), an ageing effect was overlaid onto the cards and it absolutely ruined them. The ageing effect worked on less bright colours but it also subdued the brightness of the reds, blues and yellows. Scans and pictures of the original 1909 deck do show where the whites of the borders have aged – this is perhaps what US Games sought to replicate, but to me, failed. The deck has an overall darker look which makes it less attractive. It should have been the definitive Rider Waite-Smith deck…

Lo Scarabeo produce an interesting version which they call the Radiant Wise Spirit Tarot. I imagine the name change is to satisfy the US Games stranglehold they have over the names of the original deck creators. As this is a recolouring, the line drawings look the same. The colouring has been done digitally so there are smoother colour gradients. You may or may not like this version but actually the colouring is not that bad. As with some reproductions, an attempt is made to brighten the decks, but this recolouring keeps as close to the originals as it can and I think it just about works. It is certainly beats the US Games version in my mind. See some samples of the cards from the Lo Scarabeo website.

Another modern printing is from AGMuller, the publisher who gifted us with the 1970s matt cards mentioned above. Called the Tarot of A. E. Waite, because they can’t call them original, even though they technically come from the same line drawings as the US Games offerings… The colouring in these cards is a far cry from the 1909 Pamela A edition and I do not recommend them. They have a flip-top envelope box which can be found in blue or white, depending on the edition. I had high hopes for this deck but sadly the attempt at adjusting the colours failed and are often too bright. The card stock is also disappointing.

That leaves us with expensive out of prints, or where I’m taking you now – re-drawings of the originals.

For me, the best of the bunch is the Universal Waite Tarot (US Games). Mary Hanson-Roberts did the redrawing and colouring and she does a lovely job. There are some differences in colour choices that veer it slightly away from the originals. (Both Arthur Waite and Pamela Coleman-Smith were members of the Golden Dawn – they knew that colours have specific meanings within the Golden Dawn system and deliberately chose the colours for each card relevant to its correspondences, magical and otherwise.) As an introduction to the Rider Waite-Smith, the Universal should be the go-to deck, particularly if you do not follow, nor intend to pursue a magical path.

A close second to that is the Radiant Rider Waite Tarot (US Games). The colours are fabulous (but go far away from the original colour spectrum). The cards really pop but the card stock isn’t great; they are super shiny and a little too flexible for my liking. I use them very occasionally.

One final recolouring worth mentioning is the Illuminated Tarot by Carol Herzer. This tarot deck is unique because they are individually hand painted by Carol to order. They have iridescent paint and glitter if you so choose. Read our review of this deck including details of how you can order a copy for yourself.

My least favourite Rider Waite-Smith rendition comes from Lo Scarabeo. They publish a redrawing of the Rider called, Universal Tarot, and to be honest, I find it thoroughly unappealing. It’s almost a graphic novel in style which is not my thing at all.

To talk about other redrawings of the Rider Waite-Smith would require us to venture into the world of RWS clones – tarot decks that use the 1909 publication as its base but add or change enough of the drawings, names and colourings of the deck to be able to call it something else. Llewellyn’s Recent Classic Tarot is but one. Perhaps we shall look at these in another article.