There are 22 letters in the Hebrew alphabet:

“Ch” is pronounced like a full-on Scots version of “Loch”. Along with “tz” it’s the characteristic sound of Hebrew as in the word, “chutzpah”.

Letters that take a dot in the middle to change their sound count as one letter.

For example, בּ and ב count as the same letter.

Similarly, letters that have a final form count as one letter.

For example, צ and ץ count as the same letter.

The vowels aren’t considered as letters.

Sefer Yetziroh (“Book of Foundation”) is an important book in mystical Jewish learning. Traditionally, knowledge of the Sefer Yetziroh would only have been available to Rabbis and their students.

The Hebrew letters are discussed and classified in Sefer Yetziroh in a way that’s crucial to the way people have linked the 22 letters to the 22 Tarot Trumps.

… the fact that there are different versions of Sefer Yetziroh, amongst other things, has led to people coming up with different Tarot/Hebrew letter correspondences.

There are plenty of academic websites that discuss the possible history of Sefer Yetziroh and the various different versions.

Let’s look at the possible correspondences between the Hebrew letters and the Tarot Trumps.

There are lots of ways to find a system of correspondence, let’s start with the common ground.

Sefer Yetziroh says that three of the Hebrew letters are “Mother Letters” or “Primary Letters”. 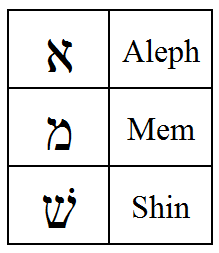 מ corresponds to water. Rabbi Yitzchak Ginsburgh says that the letter “…can be visualised as a fountain…”

Notice that Jewish mysticism doesn’t include the element of Earth in amongst the Mother letters. My understanding is that this is because we live on Earth and so we inhabit the Earth element.

How might all this connect to the Tarot Trumps?

Book-T is a useful source document for the ideas of the Order of the Golden Dawn.

It says that The Foolish Man corresponds to the element of Air and therefore to א.

Seems like we’re off to a good start. But here’s another subtlety to be aware of…

… each Hebrew letter has a numerical value but they don’t go from 1 to 22, it’s more complicated than that.

Here’s a table of the Hebrew letters and their numerical values:

So if א has the numerical value of 1, perhaps it would make equal sense to link א to I The Magician?

This was the correspondence that Eliphas Lévi used in the 19th Century.

So people even say that the figure of the Magician looks a bit like the shape of א. What do you think?

This idea is taken even further by Mark Filipas who suggests that the Tarot Trumps are a sort of “teach yourself Hebrew” cards.

Mark Filipas says that the word in Hebrew for each object in the pictures on the Tarot de Marseille cards starts with the letter that the card corresponds to. 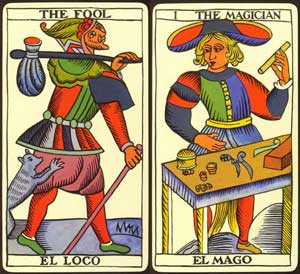 Let’s look at מ which is the next Mother letter

The name of the letter מ is written:

So it should sound a bit more like “maym” but everyone says “mem”. Notice that the word contains the two forms of the letter: the normal and the final form.

The word for water in Hebrew is:

So inserting a י changes Mem to water.

מ has the numerical value of 40. Test your Hebrew skills on this verse from the story of Noah, Genesis VIII verse 12:

It’s quite poetic in the Hebrew and is translated as:

“And the rain was upon the Earth forty days and forty nights.”

Can’t get much more watery than that association with the number 40.

XII The Hanged Man was traditionally linked to the element of Water.

Book-T says that XII The Hanged Man corresponds to the element of Water and therefore to מ.

But since מ is the 13th letter of the Hebrew alphabet, perhaps it might also make sense to link מ to XIII Death?

This was the correspondence that Eliphas Lévi used in the 19th Century.

Mark Filipas suggests that the shape of מ looks like the scythe carrying figure on the Tarot de Marseille Trump XIII.

Sure enough, two words for death in Hebrew both begin with מ 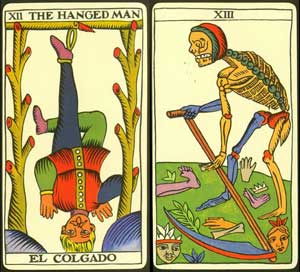 Next, let’s look at שׁ which is the third Mother letter

Here’s a table of what we’ve gone through so far: 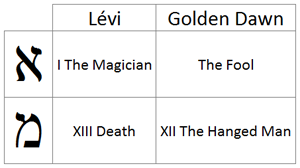 שׁ the third of the three Mother letters doesn’t follow this pattern.

XX Judgement was traditionally linked to the element of Fire.

Book-T says that XX Judgement corresponds to the element of Fire and therefore to שׁ.

But since שׁ is the 21st letter of the Hebrew alphabet, perhaps it might also make sense to link שׁ to XXI The World? This is the correspondence that Mark Filipas uses.

However, this wasn’t the correspondence that Eliphas Lévi used in the 19th Century.

Lévi thought that The Fool corresponded to the spirit of Fire and so he linked שׁ to The Fool.

Because שׁ is the twenty-first letter of the Hebrew alphabet, Lévi made The Fool into Tarot Trump XXI thereby making The World Trump XXII. 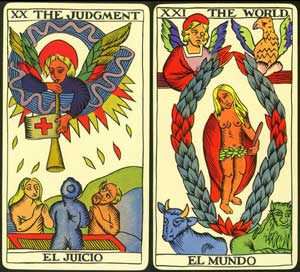 The name of the letter שׁ is:

Rabbi Yitzchak Ginsburgh says, “The spectrum of meanings associated with the name of the shin is the richest and most splendorous of all of the letters of the alef-beit.”

Splendorous indeed. These meanings include: a tooth, to teach diligently, sleep and serene peace.

But the overwhelming connection to שׁ is the concept of fire. שׁ definitely looks like a flame.

The Hebrew word for water is:

Add a שׁ and the word becomes:

So the Fire of שׁ added to water gives Heaven.

Genesis I verse 8 describes the creation of the firmament called Heaven.

Try reading this phrase which comes at the end of the verse:

The phrase has a pleasing rhythm in Hebrew. My English translation reads:

“And the evening and the morning were the second day.”

The Hebrew word for second:

is an anagram of the name of the letter:

The Final Nun still counts as Nun when it comes to re-arranging the letters.

In the order that they come in the Hebrew alphabet, the elements are Air, Water and Fire for א מ and שׁ.

Perhaps it would make sense to place them in a kind of descending hierarchy as Fire, Air and Water? Fire rising above Air which in turn rises above Water.

This gives the sequence:

Join me in the next post, where we’ll have a look at the seven Double letters.

Mick is a professional tarot reader, I-Ching reader, astrologer and dream interpreter. Please <a href=”https://www.facebook.com/mick.frankel.7″ target=”_blank” rel=”noopener noreferrer”>message him directly</a> if you are interested in any of his services.